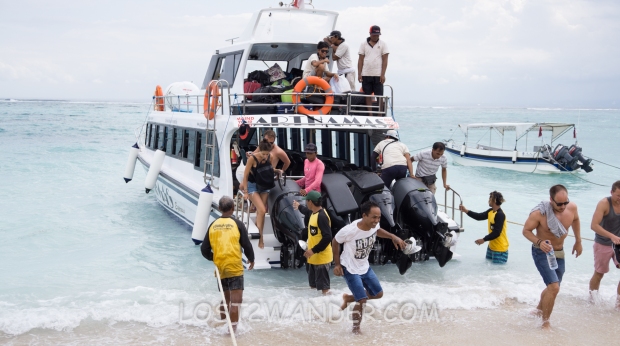 After wrote some articles with review style i think i’ll try to write with more telling story style look alike. Hope you enjoy it!

In the middle of March 2017 i already think about where’ll be our summer trip destination and our summer holiday will be in the last of June since it was a long national holiday , at the first i think about some countries in Southeast Asia , and i willingly to go to Cambodia because i want to see the magnificent of Ankor Wat Temple , but until some weeks later and for some reasons i didn’t yet decided it. I know it’s my fault 😀

And when i finally remember about the summer trip plan it’s already almost in the end of April , and it just less than 2 months,and you know whattt? We got the ridiculous of flight ticket price to any destination abroad,and that’s great!!!  No,that’s not great actually!

Since the flight ticket price already soar high to all destination abroad,then i thinking about the domestic one. At the first i think about Bali , a backpacker’s haven but you know our summer trip is in long national holiday season so Bali will be packed and full with any kind of tourists and that’s not good idea.

So , after do some little research,i found this little Nusa Lembongan Island is a new little paradise of Bali. The island is not  packed and full with tourist like Bali especially in the holiday season. So i choose Nusa Lembongan and Gili Trawangan (Lombok) to spend my short holiday , away from tourists horde and it’s annoying traffic jam. I think i made wise decision about it , voila! 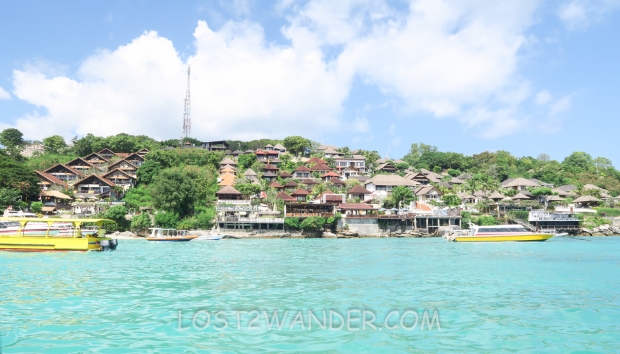 Around 3 am in the morning the train stopped in Surabaya Pasar Turi Station , and referring to my schedule we will continue the journey by flight from Surabaya to Denpasar Bali in 8 am so we still have much time to make it. Since it’s in the middle of the night we took taxi from Pasar Turi Station to Juanda Airpot , fyi the airport is in Sidoarjo area it’s in the outskirt of Surabaya City so it take a while to arrived there , bear in mind the normal time from Surabaya City Centre to Airport it’ll be around 40-50 minutes and it cost around Rp.150.000 (11 USD).

The journey by taxi was smooth , no traffic jam of course. When we arrived in the airport , it’s still quiet not many activities there except some of people waiting for check in their flight in the early morning.At 6 am we already check in and go inside the boarding room , until 8 am we are still in the boarding room not yet be called into our plane because the flight was delayed like about almost 40 minutes , oh by the way we are go to Denpasar by Nam Air , it’s a full service airlines by Sriwijaya Airlines Group. We got cheap flight ticket for around Rp.700.000 (51 USD) for 40 minutes journey , actually it’s still considered high as normal price should be around Rp.400.000 (29 USD).Do you know why i prefer to get all the hustle to fly from Surabaya to Denpasar instead from Semarang? That’s right , because it’s cheaper a lot , i can save around Rp.1.500.000 (111 USD) for two person

Taking The Selfie While The Flight Was Delayed

After arrived in the airport , we were picked up by our friend Andri and his wife Anita , He’s actually from Jakarta but in the same time with us he going to holiday in Bali with his family , and he already stay like 7 days there.Thank’s God we have Andri,so it will save our taxi cost from the airport to the city centre,lol.Andri dropped us to Krisna Souvenirs shop not too far from the airport like around 10 minutes away i think , because buy from souvenir here will be better than buy in Lombok , Lombok didn’t have many souvenir shop , i did went to Lombok in 2014 so i knew it. Actually i can’t enjoy the time here while in Krisna i keep looking into my watch to make sure we didn’t missing the boat from Sanur to Nusa Lembongan since from the information i got the last boat will be 2 pm in the day everyday , and it’s already 12 am , so after a rush we finished the shopping and saying goodbye to Andri and Anita , because he will be back to Jakarta in the night with his family. From Krisna i took the taxi to the Sanur Beach , because it was the only place where the speedboat go to Lembongan , our taxi use the meter and oh God i forgot the cost , it seems around Rp.80.000-90.000 (6-7 USD).

Finally We Are Landing In Bali After 40 Minutes Delay! 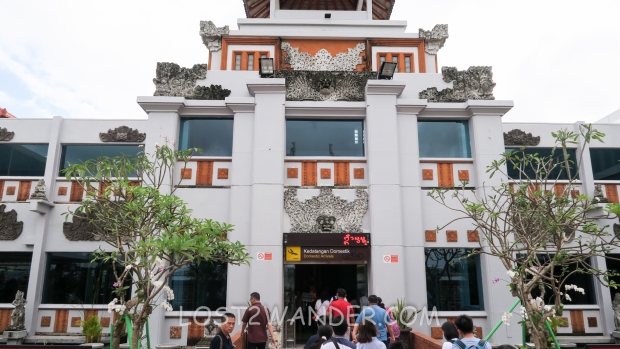 In this part i think i make some small mistake,in the middle of the trip the taxi driver asked me where will be going in Sanur , and i said we will going to cross to Lembongan Island,and he said oh okay , after a while the taxi stop in small parking area inside some kind of resort near the Sanur Beach , before we get off the driver said he will help me to buy the ticket but he asked us if there some people offering about the boat ticket we should answer we already have it , at this moment i was fascinated by his kind heart and i think he tried to protect us from locals scam , but i was wrong. The fact that he help me to buy the ticket is because he will get the tip from the boat company , looool 😀 😀 😀 , and my mistake is because we’ve planned to go to Gili Trawangan from Nusa Lembongan so if i bought the ticket from one company it will be cheaper , since the driver didn’t know this thing then we got more expensive ticket from different company , sigh! my fault. At the time our speedboat ticket from Sanur to Lembongan Cost Rp.350.000 (26 USD) per person one way , if you buy the return ticket it will be around Rp.500.000 (37 USD) for 30 minutes journey. The speedboat ticket from Nusa Lembongan to Gili Trawangan will be Rp.650.000 (48 USD) per person one way for like 2 hours journey.

After 30 minutes journey we finally landed on Jungut Batu Beach in Nusa Lembongan. Well don’t forget to wear short pants since all the boat will landed in the beach and no dock , so getting wet that’s the rule 😀

So Beachy Type Of Landed Huh?lol

When we arrived in Lembongan , the transfer to our hotel were already included in speedboat ticket. There are only 2 kind transportation in Lembongan , either by passenger pick up with little modification to load people in back same with Thailand’s Songthaew , or the other option is by motorcycle , motorcycle usually become the best choice among traveller in Lembongan , mostly use the motorcycle to explore Nusa Lembongan and its’ neighboring island Nusa Ceningan , whaatt seriously?? Yup , there’s a bridge connecting the two island called Yellow Bridge , i ‘ll talk about this later.

The motorcycle rent cost for a day should be around Rp.70.000 – Rp. 80.000 (5-6 USD). I paid for two days since i planned to spent two nights here in Lembongan. We stay in Swara Homestay 2 in Jungut Batu Village , and the price is quite cheap it’s only Rp.175.000 (13 USD) per night with AC , the room is pretty basic but it has nice semi outdoor private bathroom but not included the breakfast. Later i found that the price when i booked was too cheap since the official price for high season is Rp.250.000 (19 USD) no wonder the owner always asking me some weeks before the date whether i want to cancel the booking or not , ooops…sorry i won’t.

After check in we are looking the motorcycle rent and luckily that’s not too far from our hotel so we took it. We are going to Jungut Batu Beach to looking for restaurant since we are not yet have our lunch , because we are in rush before crossing to Lembongan. Initially we’ve planned to go to The Deck , The Deck is one of the famous fancy restaurant in Lembongan to watch sunset , but we found out that the price is higher than our tight budget so we choose the Oka 7 restaurant near it. The taste is so-so not too bad actually , but the price i think still considered high for budget backpackers , the menu start from Rp.50.000 to up.

We enjoyed our pizza while watching the people activities in the beach , it’s such give us a calming and peaceful feeling. The best thing about this fancy restaurants is its’ location , it were placed in kind of cliff side of Mushroom Bay Beach so you can see the beach from above also the best place to eating and drinking while watching the sunset. 😀 After finished our late lunch , we are heading down to the beach to observe that the water already receding from the beach , we taking photos and keep busy watching small crab crawling above the dried seabed rock and other small animals that left by the receding wave. Finished with our “kiddie” things in the beach we are going back to the hotel and take a  sleep even it’s still 5 pm. We didn’t yet sleep man , we can’t sleep in the train last night because it’s too noisy and the train speaker too talk active to remind the passenger in each station. 😦 I think it’s better to sleep early and collecting our strength to exploring the island tomorrow. 😀

Jungut Batu Beach In The Afternoon When The Sea Recedes Slowly

Oka 7 Is In the Right Side

The Journey Is Continue… 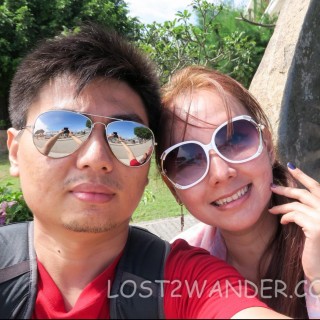